My trip back home was lovely! Thank you for asking. I split my time between Brooklyn and upstate NY, hung out with my family, embarrassed my cousins at a high school football game, went to an art show, did an 80s workout, and told my childhood best friend to stop getting tax refunds. I even drooled on my aunt’s leather sofa while taking a glorious nap. Although I would love to regale you with tales of my comings and goings, I know

Besides, I am sure you’re here to see if I actually succeeded in sticking to my vacation budget. To recap, my goal was to spend 4 days in New York City and upstate NY and spend no more than $100 on food, $30 on transportation, and nothing on entertainment. Did I succeed? Mostly yes. My spending came in at a whopping $116.69

Oh, you don’t believe me. I shall show you. Let’s go through each step of my plan and how it went.

So I stuck to this plan 100%. I used CTA to get to O’Hare and took the bus and train from LaGuardia to Brooklyn. Even though I was over the commute after the first hour came and went it was a relatively simple route (SBS 60 bus to 125th street; 5 train to Presidents Ave). I also took public transportation from Brooklyn to midtown Manhattan to catch the Megabus to upstate. The Uber Pool ride to LGA on Sunday came in under estimate too at $25. Still I wound up spending $40.16 on transportation costs. No, I did not break down and cab around the city. However, I did neglect to plan for transportation costs while upstate with my family. You see public transportation in New York’s capital district is piss poor on a good day so having a car is a necessity, especially if you live in the suburbs. Since I have access to cars when I’m at home I figured I wouldn’t be spending money to get around. I forgot that cars need gas. I paid $10.16 for gas for my dad’s car. And before you accuse me of being cheap, I put $20.16 worth of gas in his tank and he gave me back $10 in cash. The other unexpected transportation expense happened in NYC on my way back to Brooklyn from midtown Manhattan. I had to put another $5 on my metro card because my fare didn’t transfer between trains. Note to self: it’s not a transfer if you leave the station.

This was wishful thinking. I don’t know how I thought I was going to spend four days with my best friend and my family and not do any sort of entertainment activity. Thankfully, my loved ones had budget friendly fun in mind. My baby cousin is the starting cornerback on the varsity football team at my high school alma mater. He had a game Friday night and despite all of my protestations that I did not want to go I found myself screaming my butt off in the bleachers. Not only did the team win 42-0 (that never happened during my high school years), but my cousin had a pick six.

Admission to the game was $3 which my other cousin offered to treat me to. Once in the gate I spent $2 on candy at the concession stand (taste the rainbow) and gave my other cousin (yes another one) $4 for snacks.

My other outing was also inexpensive. Upon returning to Brooklyn from upstate my BFF informed me that I would be joining her at an art show. When she mentioned that the $10 cover would include real food that could constitute a meal I was all for it. I can neither confirm nor deny that someone brought along Tupperware to give the leftovers a safe home. We were able to catch rides with friends to and from the venue so there was no cost there. Although not outlined in the budget I think spending $16 on entertainment is a win.

I did keep my word and pack food for vacation. I mostly stuck to perishables I’d purchased earlier in the week and did not want to spoil while I was away. 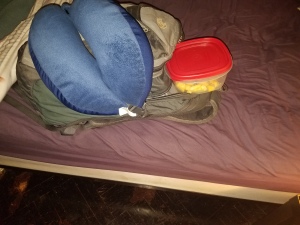 I made every effort to eat what I’d packed. I polished off the pineapples on the way to the airport, ate the pancake for breakfast the morning after I arrived, and used the spinach and other fruits to make green smoothies. I wound up not buying any groceries. Nor did I do much fridge raiding. In preparation for my visit my family made sure to have nothing edible in their refrigerators. Their unfortunate grocery shopping habits left me to fend for myself lest I starve. I spent more on take out than anticipated but much less on restaurant meals. Here is how my food spending broke down:

So there it is, all accounted for: $116.69 of spending over a four day vacation in New York. I didn’t do it according to plan, but I did manage to stay on budget. This trip left me with a few lessons learned and observations.