From January 2010 until September 2012 I was 100% debt free. No mortgage, no car note, no student loans, no credit cards, no IOUs, nothing. It was the first time since 1998 that I didn’t owe anybody anything. I will not give you the impression that I budgeted, brought in extra income, and cut back my lifestyle to accomplish this. Here is how I did it. I had a house. My employer at the time relocated me to a different state. I sold said house at a $45,000 loss. That employer reimbursed me 100% of the loss on sale. I used that money to pay off everything and didn’t incur a dime of new debt until I took out a student loan for living expenses during business school.

I cannot describe the freedom I felt during those two years and eight months. All of my money was mine to do with as I pleased. I gave freely, and I saved greatly. In the course of a little over a year I managed to save $20,000 and still travel to Africa, throw myself an over priced 30th birthday party, pay over $1000 in business school application fees, and piss away more on other forgotten frivolities. It just hit me that I should have funded a ROTH IRA back then too.

None of that would have been possible without being debt free and I would not have been debt free without my grandmother.

I bought my first home on a whim when I was 24 years old. I had not been saving for the purchase, working on my credit, attending home buying classes, or doing anything that one is supposed to do prior to making such a significant purchase. Actually, I did none of those things prior to buying my current place either.

My employer (yep that same one) had decided that I finally earned my promotion and attached it to a transfer to a new state. The relocation policy was supremely generous with a lump sum of cash to cover moving expenses, including temporary housing. The money nearly doubled if a house was purchased. $5,000 is better than $3,000 so I decided to buy myself a whole ass house. It was 2004 when all you needed was a pulse to get a mortgage so I marched my Black ass into my credit union with my barely functional credit report and walked out with pre approval to purchase a home up to $150,000.  The best part was that I only had to put 5% and they could give me a second mortgage to cover the other 15% of the down payment and then finance the other 80% with a 5 year balloon mortgage. Hello

At the time I had no clue. The only thing on my mind was figuring out how I was going to come up with the 5% down payment so that I could get that extra money for relocation. I had about $2500 in savings and was expecting my bonus in another month. That still left me about $1500 short. To its credit my credit union had rules about where the money from the down payment could come from. They had to be able to track it to an income source and if not then it had to be in the account for at least two months prior to withdrawal. Enter grandma. I don’t even remember how the conversation went but I do know that a check for $1500 was in my mailbox and deposited into my account a week later. If she had not been able to do that for me I would have never become a homeowner, been able to build equity for over five years (well technically I lost equity), and turn a nice profit (in a round about way) when I sold.

The house was not the first time my grandparents invested in me. They also paid a large chunk of my college tuition when FAFSA and the financial aid office would do me like Mister did Celie. While they did not foot the entire bill, their contribution ensured that I could register for classes and come out of a school with an $80,000 price tag with less than $20,000 in student loans.

My grandparents were not wealthy people, but they did have wealth. Born in Savannah, GA in the 1910s they eventually made their way to New York City during different points of the Great Migration. In spite of this country’s best efforts for them not to be, both of my grandparents were highly educated, my grandmother even holding a Master’s degree from Columbia University. They worked regular jobs, him a postal worker and her a public school teacher. By the time I met them in the early 1980s they were happily retired world travelers living a comfortable life that allowed them to be generous with their family while they were still alive.

So often when the term generational wealth is mentioned it conjures ideas of people inheriting millions of dollars and trust fund babies. Wealth simply boils down to the simple equation of assets minus liabilities. If your assets outweigh your liabilities then congratulations you have wealth. I never inherited millions or even hundreds of thousands of dollars, but I did benefit from generational wealth transfers that made all the difference in my financial wellbeing.

One of the biggest reasons that I am so emphatic about building wealth and encouraging others who look like me to focus on doing the same is because I recognize what it did for me. Wealth can mean a down payment on a modest house, or an investment in a small business, or at the very least a buffer against life’s storms (illness, job loss, etc). Wealth can mean freedom and flexibility and give us the precious resource of time to rest, to learn a new skill, or to take career risks. Wealth is a gift that gives exponentially. Unfortunately, the state of Black wealth in America is not pretty. In the 30 years between 1983 and 2013 the median wealth of Black families has decreased by 75%. When removing depreciating assets like cars and furniture from family wealth calculations, the Federal Reserve Board’s Survey of Consumer Finance found that half of Black families are worth less than $1700.

As it stands social class is defined by income, not wealth. If it were defined by wealth then it would take a net worth of $68,000-$204,000 to enter the middle class. Would you make it? According to the Institute for Policy Studies only Black households in the highest income quintile of those earning more than $104,509 would qualify. Because so much of the wealth equation is tied to home value, more than half of Black wealth was lost to the 2008 financial crisis. Blacks are also less likely to have diversified wealth, as we are 35% less likely to invest in the stock market.

And before anyone tries to blame this on “cultural deficiencies” or single parent homes this picture persists regardless of education level, work status, and family structure. 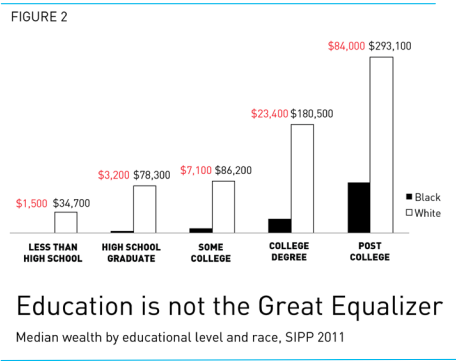 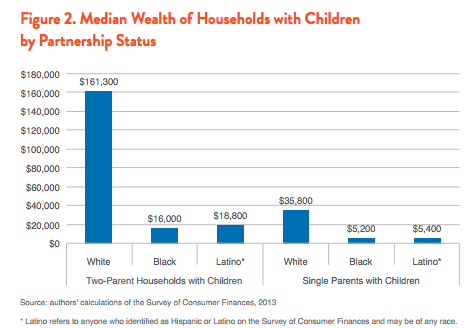 This chasm of inequality was caused by centuries of being barred from the economic engine of this country or cheated and robbed of the little pieces we could touch. In spite of this bleak picture, there is good news. U.S. policy incentivizes wealth building. Everything from the mortgage interest and property tax deduction to the tax deferred contributions on 401ks, Traditional IRAs, 403Bs and other retirement vehicles are set up to drive wealth. The thing is you first need to have enough money to be able to take advantage of these benefits. In my experience generational wealth feeds this ability. I was able to contribute to my 401K sooner (and get an immediate return due the company match) because generational wealth limited my student debt. I was able to take home more post tax dollars to save and invest because generational wealth allowed me to the buy the house that gave me thousands in tax write offs.

Last week after reading my post about the 9 to 5 scam, a classmate from undergrad commented that she didn’t enter her chosen career field with the intention of getting rich. I get where she is coming from. The pursuit of money for money’s sake feels empty to many and often our passions don’t lead to massive paychecks. However, not making a lot of money should not keep us from wanting to build wealth, not just for ourselves but for the family we may not even meet 50 to 75 years from now. Trust me when I say that it’s worth it to find that extra $50 or $100 to add to the 401K contribution or to buy your first shares of stock. It is worth it to be able to invest in your family while you’re still living. Oh, it is also worth it to plan what will happen to those assets when you’re gone, but that is another post for another day…

7 thoughts on “You Ain’t Got to Be Rich, But You Do Need Wealth”