Upon graduating from business school in June of 2014 I had yet to find a job. My lease was up, I had no income, and my savings were dwindling. I sublet my classmates’ apartments a month at a time thus giving myself shelter and relieving them of the burden of paying rent while they climbed Kilimanjaro. But as the summer drew to a close and the f fell off of unemployment I knew that I needed a more permanent arrangement.

At the end of August, with homelessness looming in under a week I found a longterm sublet that was not only in my price range but also in a great neighborhood along Chicago’s lakeshore. Sure, it was a studio (up until that point I’d never lived in anything smaller than a two bedroom) in a “vintage” building and lacked the necessities to which I had become accustomed, like garage parking, washer/dryer, central air, and a dishwasher, but living there was affordable and gave me time to figure my shit out. Luckily, two weeks after moving in I was offered a job that paid just enough to keep me from further raiding my old 401K for survival.

Although it was a relief to once again have stability after months of uncertainty, I was over it before the end of the year. I was underpaid, hated my job, and poor Silver Betty had racked up more parking tickets than she could handle. I started looking for a new job in February and secured one at my current (but soon to be ex) employer by mid April. With a more than 70% increase in my base pay (plus a $40,000 signing bonus), I decided to get my George and Weezie on.

I found a realtor and got to searching for an apartment with hardwood floors, in-unit washer dryer, a dishwasher, and assigned parking all in a safe neighborhood within walking distance of public transportation, grocery stores and restaurants. I quickly learned that getting all of that would cost me upwards of $1700/month for a one bedroom, plus an additional $250/month for parking. After touring half a dozen apartments it dawned on me that I used to pay half of $2300/month to rent a 2 bedroom/2 bathroom condo with an incredible view of downtown and Lake Michigan. It didn’t make sense to me to pay nearly $2000/month to rent a one bedroom apartment when for just a few hundred dollars more I could probably buy a two bedroom.

Had I been saving for a down payment? Had I finished paying off my student loans? Had I even started my new job, let alone received one paycheck?

I based my decision to re-enter the world of homeownership on the fact that I could afford the monthly payment (including HOA) and the idea that I was getting more for my money. But was I right?

Round 1: Buying Vs Renting 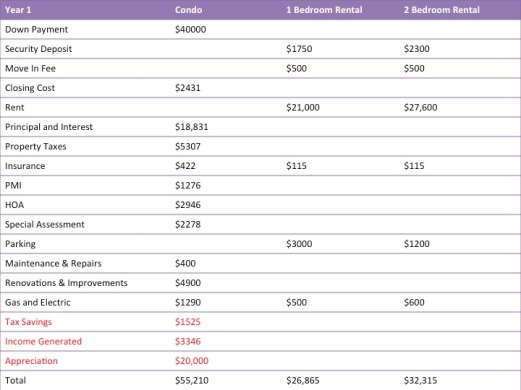 Maybe it’s just me, but I’m not quite sure that whole “getting more for my money” thing happened. The cost of one year of home ownership cost me $28,345 more than throwing my money away on the one bedroom apartment I initially planned on renting. Hell, I would have even saved $22,895 if I’d splurged and rented a two bedroom/two bathroom apartment comparable to the one I lived in during grad school.

Well maybe it’s not all bad. I did come out of it with an asset initially valued at $360,000. I put $40,000 down, paid another $4353 toward equity during the year, and added $20,000 to my net worth through appreciation. However, if I had put the difference between the cash outlay for one year of owning the condo and one year of renting toward paying off my student loan (which at the time was at a 4.065% APR) I would have increased my net worth by $29,497. Investing the difference in the market at a 10% return would have gained me $31,180.

But buying a house isn’t a one year expense. Most mortgage terms are for between 15-30 years. Even if I don’t stay in this place for three decades I would like to not have it be a complete money suck while I am here. Luckily these interwebs are crawling with Buy Vs Rent articles and calculators. I found an awesome one on the IAG Wealth Management blog. You have to provide your email address to get it but it’s well worth giving out your spam account. There is a tab with three ways to compare the cost of renting vs. buying, another one to calculate the costs of ownership and appreciation over the life of a mortgage, and a nifty table that let’s you get an idea of the principal and interest payment on different loan amounts and interest rates. It is the bomb dot com. If you’re thinking about purchasing or have already purchased and want to see if it was a good life decision then I recommend plugging your numbers into the renting vs. buying cost comparison tab.

The IAG template is good but I chose to modify it because it doesn’t account for tax savings and any income generated from the home. I don’t mean money made working from home, but rather income from a roommate or AirBnB guests. I modeled out my first three years of owning this condo, which took several hours of sifting through bank and mortgage statements, tax returns, and closing documents. Wanna see the results?

Great! Here they are:

I compared the cost of purchasing my condo to the cost of renting a comparable apartment downtown. I used the numbers from the unit I used to rent (with the world’s best former roommate).

I’ll help you get your bearings. The numbers in the own columns are the real numbers (or best calculations of them) for my place. 1) I used the 2014 selling price of my old apartment to get the property value in the rent column because it was within a year of when I closed escrow. 2) The rent is the total monthly rent we were charged while living there. 3) I matched the electricity costs since both places are 2 bedroom/2 bathroom units. 4) To calculate capital efficiency I used 2% annual inflation on my condo’s 2015 value to calculate appreciation versus 5% annual growth on the down payment if I would have invested it in the market for 30 years. 5) I multiplied the annual cost difference between renting and buying (using the net expenses method) by 30 then subtracted that from net home appreciation to get the 6) final value of homeownership.

The cashflow comparison is a simple out-of-pocket comparison. Once I bought the house how much did I have to spend to live there compared to how much I would have spent to rent. The net expenses matchup is exactly the same, except it doesn’t count money returned to me (i.e. what I paid in principal) as a cost. The highest and best use of capital method measures all of the capital I have to spend and compares it to what else it could be used for, in this case I’m going for stock investment.

Although the cost of principal, interest, monthly HOA fees, PMI, taxes and insurance was $18 less than the annual rent on my former apartment, in year one it was more expensive to buy than to rent based on out of pocket expenses.  The biggest driver of the higher ownership cost was renovations. I don’t do beige walls or carpet so I had oak floors installed in the bedrooms and the entire apartment painted to my liking. 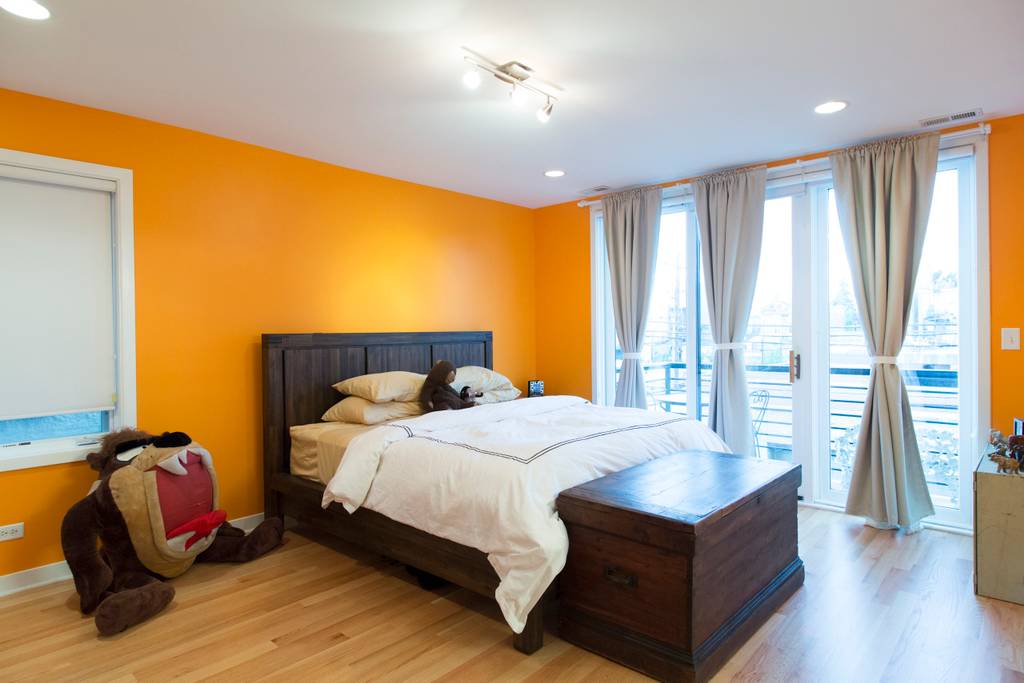 I also got hit with the first installment of a two part special assessment so the condo association could have the building sealed. I did come out ahead with the net expenses and the highest and best use of capital methods (+$1104/year and +$6411/year, respectively).

This time I compared the cost of owning my condo vs. renting it. I trolled Zillow for comparable nearby rentals to get an estimate for how much I’d likely pay for my unit.

I refinanced my mortgage three months into the year, thus 1) lowering my interest rate and overall monthly payment. An appraisal was required to refinance and to my pleasant surprise 2) the condo had appreciated by $20,000 which led to a reduction in PMI from $106/month to $50/month. Monthly HOA fees were higher due to a 35% increase needed to cover rising building costs (water, management company, etc.). 3) I paid just under $2000 in closing costs to refinance, but it paid for itself before the year was out. 4) I was also able to write off a full year of paying property taxes and mortgage interest on my 2016 tax return, which gave me back over $5000 in costs. 5) Although I did not pay for gas at my previous apartment I figured any sane landlord would pass this cost to the tenant if living in my building so I factored it into the rental expense. I also assumed that I could just as easily AirBnB this place as a renter so I gave that column the additional income too.

Across the board in year two owning was less expensive than renting. I will admit that refinancing kind of padded the numbers since I did not have mortgage payments in November and December. I did pay extra toward principal but I didn’t include it in these numbers since those payments were optional.

This is where I am at today. I have lived at my current residence for two years, four months, and four days. I once again did the cost comparison against what it would cost to rent my unit versus owning it.

I was sick of paying PMI so I wagered that RedFin was telling me the truth about my home value and paid $105 for another appraisal to get my Loan To Value to 80% or less. RedFin didn’t fail me. 1) I saw another $35,000 in appreciation between August 2016 and August 2017. 2) I made my last PMI payment in August. As luck would have it, just as PMI was falling off 3) Cook County property tax hikes came on, causing a shortfall in my escrow account. 4) I am expecting a decline in tax savings since I am paying less in mortgage interest. It’s cool though because my monthly HOA decreased by 14% due to the vacant unit finally getting sold and all 8 owners once again paying dues.

Across all three methods of comparison I am coming out even further ahead by owning rather than renting. I expect these numbers to remain stable for several years as I do not foresee any special assessments or major renovations being needed.

Thus far it appears as though homeownership was a good life decision this time.

By year two the savings, although smaller, even hold up against renting the one bedrooms I looked at. True, I could forego in-unit washer dryer, garage parking, dishwasher, a balcony, and elevator entrance into my unit and save even more paying under $1000/month to rent a vintage apartment or share a place with a roommate or two.

To that I say 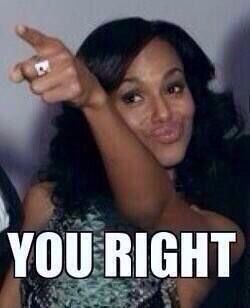 Since we all know that buying a personal residence is not an investment, in Part Deux of this series I’ll explore what I got right and wrong (and lucky) about home ownership. In the meantime if you’d like to use my Buy vs. Rent Excel model leave a note in the comments or shoot me an email.