A few days after moving from New York to Minnesota I went to pick up the keys to the apartment I had just leased. My bladder had been screaming at me for the last hour so I decided to pop into my vacant unit to use the bathroom before heading back to my temporary housing. I ran to the apartment, did the peepee dance while fiddling with the keys, flung open the door, and had my pants down before I even reached the bathroom. I waddled to the toilet without bothering to turn on the light, plopped my ass on the seat and let it flow. When peace was restored to my world I felt around the wall until my hand found the side of the toilet paper dispenser. But when I went to tug on the roll all I felt was a metal cylinder. It was at that moment that I learned a valuable life lesson: apartments do not come with toilet paper.

Two years later another realization dawned on me. Not long after buying my first house I noticed that the refrigerator was leaking water. Being the responsible 24 year old I was, I called my real estate agent to get the number of the previous owner to tell them about the issue. Said agent promptly informed me that once I signed those closing documents any issues with the home were now my responsibility. Buying toilet paper is child’s play compared to paying service call fees.

In part 2 of this homeownership series I detailed how I significantly lowered my monthly mortgage and escrow payments by refinancing and taking advantage of equity through appreciation to reduce, then eventually eliminate PMI premiums. However, principal, interest, taxes and insurance are not the only cost of ownership. While they may not recur monthly, maintenance and repairs are unavoidable expenses that many do not consider when calculating how much it costs to own a home. They did not cross my mind when I bought my first house and while I loved the home I made, I was stuck with exorbitant energy bills because the windows were from the Truman administration and I could not afford $20,000 to replace them. I don’t even want to talk about the time that I came home from Miami to ankle deep water covering 80% of my basement. Additionally most people tend to upgrade their accommodations when going from renting to buying.

More space typically means higher utility bills, and unlike many landlords, lenders do not include water, gas, and electric in the monthly payment.

When left unaccounted the “hidden” costs of owning a home can make what initially looked like a good financial decision turn into a stressful money pit. Did I figure in the costs of increased utilities, repairs, and upgrades when purchasing for the second time?

Thankfully, I evolved and have lowered my annual cost of ownership by continuously improving how I manage my home.

Maintenance Is Cheaper Than Repair and Replacement

This year my furnace stopped working. In January. In Chicago. On a Saturday. 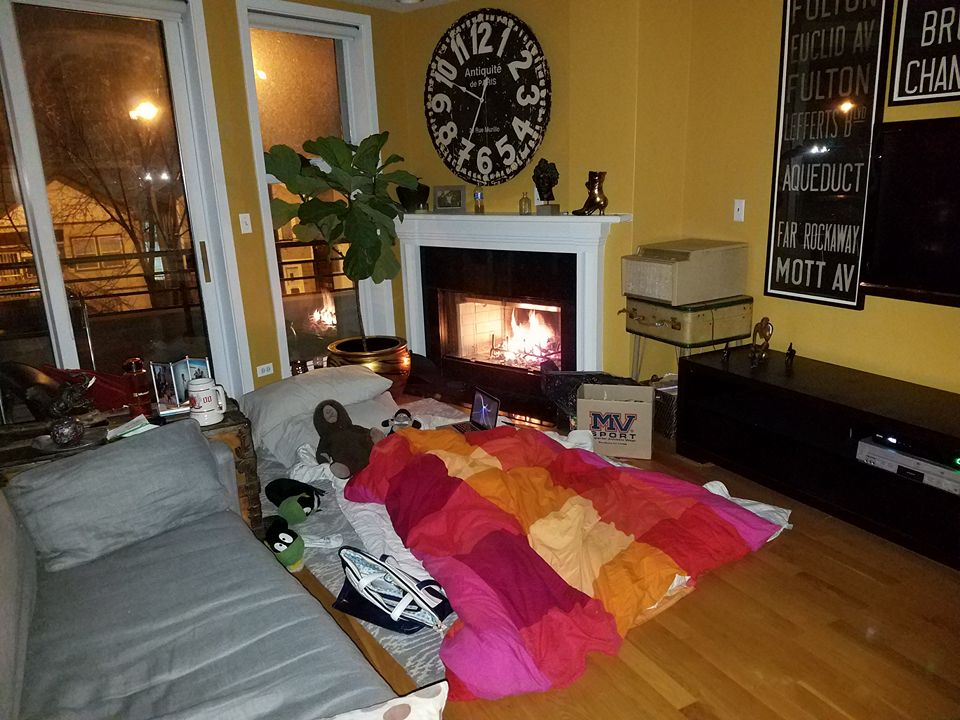 Although this may look like a cozy setup, I assure you it was not. The temperature in my apartment was hovering around 45º (we only use Fahrenheit on this blog because this is ‘Murica) and it is only now, eleven months later that I’m remembering that I own an air mattress. Anyways…the HVAC company arrived on Monday and informed me that while I did not need a new furnace it would cost $1182.95 to repair the current one. The cause of the breakdown? A filter that had not been changed in I don’t know how months. The cost of a new filter? $25.99. Now Filtrete packs stay in my supply closet.

I am always cold. My body temperature barely gets above 98º and I have never had a fever. None of my former roommates will live with me again because I keep the thermostat around 80º from October through May. In the two years and four months I’ve lived here my gas bill has gone over $100 only two times. How do I stay toasty for less?

Smart thermostats are the greatest invention ever made for people who are always cold but have an aversion to pants. It even has regular reminders to change my furnace filter.

With Nest doing the cost control for me on the natural gas side, last fall I turned my attention to my electric bill. I read online that vampire energy costs hundreds of dollars a year. For those who don’t know, vampire energy is electric power consumed by electronics and appliances when they are off. Armed with this information I unplugged all of the appliances on my kitchen counter and lamps that offered more decoration than light. I dug power strips out of storage containers, plugged all of my electronics into them then turned them off when not in use. In one month my electric bill dropped more than $25. Year over year I have cut my electric bill by more than 30% with minimal effort.

I do not consider myself a handy person. I own a basic toolbox that my sorority sister made me buy from Meijer when I moved into my first house. My solution when anything stops working right is to turn it off for fifteen seconds. If that does not work I am quick to call a repair company. Two months after moving in I decided to throw a Labor Day cookout. It was blazing in the Chi that day. A few hours before my guests were to arrive I noticed that my air conditioning was not turning on. When flipping the switch in the fusebox did not ameliorate the situation I panicked. I could not have my friends sitting in a sauna and I did not want to cancel, so I called an HVAC company for emergency services. It took the repairman less than five minutes to pinpoint the problem. The power switch in the utility closet was off. Because I’d overlooked this, it cost me $241 to bring a repair man out on a holiday to do nothing more than flip a switch.

I almost made the same mistake less than a year later when my dishwasher wouldn’t turn on. Thankfully, the kind man at the Whirlpool service center told me to look under the sink to make sure the power was on before he’d send out a service truck.

Ironically, now I keep it turned off between uses to save on electricity.

It took a while but I have learned that not every household mishap requires repair service. When the timing knob on my dryer broke I contemplated calling GE or buying a new one. Instead I looked online for a replacement part and fixed it myself for less than $50.

Save Monthly For Repairs and Replacements

Just like everyone needs an emergency fund, every homeowner needs a house fund. Even if your home is brand spanking new, at some point something will need to be fixed or replaced. The rule of thumb is to budget 1% of the purchase price annually for repairs. One of my fifty-leven bank accounts is a savings account strictly for home repair. Did I start it from day one?

A year after moving, my water heater kept going out so I brought out a HVAC service (rightfully this time). Although the repairman was able to get the hot water working, he warned me that it was only a temporary fix. The water heater would keep going out and needed to be replaced. That’s when I started saving for a replacement. I had saved almost $1000 when my refrigerator breathed its last.

I’d saved $1500 toward the cause when my furnace died in January.

It was nothing but Scotch tape and Jesus that the water heater held on until this summer when I’d once again saved up enough money to finally have it replaced.

I am not expecting any major expenses in the near future but I’m saving for them anyways. That 1% rule of thumb is spot on. The refrigerator cost over $1800. Fixing the furnace was almost $1200. Replacing the water heater was almost $3000. Some years you’ll spend a fraction of your house fund and others you’ll spend several years’ worth. Better to have it set aside than be blindsided.

Since buying my first house I have loved being a homeowner. While regular maintenance is not my ministry, it is a small trade off for the autonomy, tax breaks, and feeling of accomplishment that ownership gives me. I will readily admit that owning was not always financially beneficial. I came out on the losing end with my first purchase. Thankfully with years come wisdom (and a better market) and this time buying worked in my favor. Owning a home is not everyone’s dream, and that is absolutely understandable and okay.

However, if being a homeowner is on your bucket list I hope that this series was helpful and gave a comprehensive perspective on what achieving the “American Dream” really entails.